Did you ever wonder what the world used before sugar? It seems people used a natural sweetener – honey!

Honey is the predecessor of sugar. And in some places, it’s still the preferred sweetener – all because of its taste and texture. But did you know there are different types of honey in the market? Yes. Depending on the composition, source, color, processing methods, and therapeutic applications, honey comes in several varieties. Fascinating, isn’t it? Scroll down to know more on each honey variety. Trust me, you’d be amazed!

Honey is an impure and supersaturated sugar solution – a natural, original, sweetener. Its unique (though variable) combination of components makes honey a prized addition to the diet.

It has been used in food for at least 6000 years, mostly as a sweet source for much of the world’s population. The first written reference to honey, inscriptions on a Sumerian tablet dating back to 2100-2000 BC, mentions honey’s use as a drug and an ointment.

Honey is produced by six to eleven of the approximately 20,000 species of bees. The bees (most commonly, Apis mellifera) drink nectar from a flower and blend it multiple times with salivary enzymes (diastase and invertase) in their honey sacs.

The floral nectar is chemically transformed into honey when the complex sugars are enzymatically broken down into glucose and fructose, and excess water is evaporated.

Yes, nectar and honey are different! They differ based on their chemical composition. Nectar is an aqueous solution of sugars, amino acids, proteins, lipids, minerals, and other components, whereas, honey is more processed and rich.

Let’s look at what honey’s got.

What Is The Composition Of Honey?

Depending on the source(s) of nectar, honey can have a variable composition. The average composition of honey samples collected in and around the United States are listed below:

Honey has minerals like potassium, sulfur, chlorine, calcium, phosphorus, magnesium, sodium, iron, copper, and manganese. It also has vitamins B and C.

Now, let’s get to the point. Based on the biochemical composition and nectar source, honey comes in many types. And not all varieties taste and function the same.

Explore more about each (unifloral) variety in the next sections!

What Are The Different Types Of Honey?

Based on its texture, honey can be either liquid, granulated, creamed, chunked, or can be of an unprocessed form (called comb honey).

Depending on the level of processing, honey can again be divided into raw and pasteurized forms. Raw honey is the crude form. It is directly extracted from the comb before being sent for any refinement. It has the highest therapeutic value. Pasteurized honey is obtained after heating and straining it to get rid of the bacterial or fungal contamination.

These floral types of honey are replete with active phytochemicals and differ from each another. Take a look at what each unifloral variety has.

Manuka honey is produced by bees that feed on the flowers of the New Zealand Manuka bush (Leptospermum scoparium). It contains high concentrations of methylglyoxal (MGO) and dihydroxyacetone, which may account for its antibacterial activity.

Applying manuka honey on wounds stimulates the formation of new blood cells and promotes the growth of fibroblast and epithelial cells. This honey has potential wound-healing (vulnerary) activity.

It is rich in vitamins B1, B2, B3, B5, and B6, and amino acids lysine, proline, arginine, and tyrosine. It also contains minerals like calcium, magnesium, copper, potassium, zinc, and sodium.

Coming from the alfalfa (Medicago sativa) flowers, alfalfa or lucerne honey is famous for its prebiotic effects.

It has fructooligosaccharides that promote intestinal bacteria and improve digestion . Having alfalfa honey regularly can treat anemia, diabetes, and fever (antipyretic agent).

Eucalyptus honey can particularly be helpful for children with compromised immunity.

Acacia honey is a pale, liquid glass-like honey produced by bees that feed on Acacia flowers. It contains vitamins A, C, and E, flavonoids, and essential fatty and amino acids.

Due to its antioxidant properties and an abundance of micro- and macronutrients, buckwheat honey can protect your body and DNA from chemical or oxidative stress – better than manuka honey.

Clover (from Trifollum species) honey is one of the safest dietary antibacterial agents you can get.

Unlike manuka, this honey doesn’t have methylglyoxal and doesn’t need hydrogen peroxide for its antibacterial effect. It is, hence, not a broad-spectrum antimicrobial agent.

Clover honey has unique phenolic compounds, along with the bee-derived antimicrobial peptides. These could be responsible for the specific antioxidant and antimicrobial activity against Pseudomonas, Bacillus, Staphylococcus species.

One of the dark-colored, thicker honey varieties, sage honey is known for its greater sweetening and antioxidant properties. The Californian sage honey is famous for its aroma and flavor.

It has antibacterial, antioxidant, expectorant, and digestive properties. This honey type may also control diabetes.

Lavender honey is rich in phenolic compounds, amino acids, sugars, and essential enzymes. It has potent antifungal activity against Candida species – thanks to these bioactive elements.

Though not as high as manuka honey, lavender honey too possesses antioxidant capacity because of its vitamin C, catalase, and flavonoids. It is used to treat foot ulcers and other fungal infections on the skin.

Rosemary honey is produced from Rosmarinus officinalis and is widely used in European countries. It is rich in kaempferol, an antioxidant.

Jamun (Syzygium cumini) honey is famous for its antihypoxic activity. A specific dose of this honey can be topically applied to cure the deadly Fournier gangrene.

Since it has high osmotic pressure and viscosity, it prevents microbial growth and promotes wound healing when applied to the affected areas.

Sun Sep 20 , 2020
Before the high-profile collaborations with celebrities, tattoo artists, and sports megastars; before the colorful, on-trend shock drops; and most definitely long before this crazy jewel-encrusted thing, the subversion we’ve now come to expect from Hublot was a whole lot simpler: a rubber strap, paired with a precious metal case. That’s it. Cast against […] 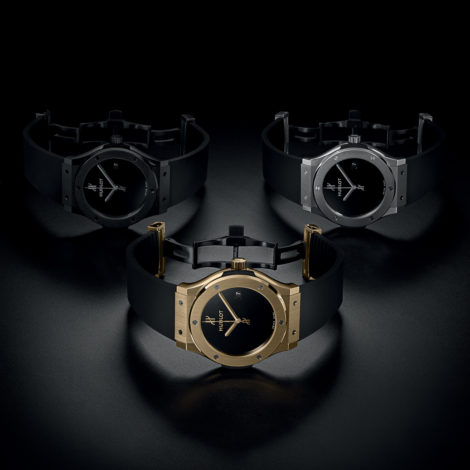