Mall of Qatar: Qatar connects to an array of destinations around the world, making it an extremely busy transit spot.In fact, Hamad International Airport has fast become the global gateway for overseas travelers.So if you’re scheduled to make a stop and are looking to break up your long-haul flight, why not tack on a few days to your travels and explore this beautiful Gulf nation?It’s not only one of the safest countries in the world, it also offers true Arabian hospitality.There’s a rich variety of food, adventure, beaches and sand dunes and. of course, year-round sunshine.Here’s a quick guide to 14 of the best things to do in Qatar:

Dune bashing in the desert is a popular Qatar activity.Pixabay / Creative CommonsIf there’s only one thing you have time for in Qatar, make it a stint in the desert. The sand dunes are as high as they are steep, making the drive across the desert to the sea a spectacular event. You can spend a night in luxury Arabian tents or pitch your own, eat local food and sleep under the stars.Several operators in the country offer dune bashing, a thrilling ride along the dunes. Experienced drivers will pick you up from your hotel and take you into the desert for a half day, full day or overnight adventure.

Tip: While dune bashing is an extreme sport, kids are usually welcome to come along for the ride. Just ask your driver to take it slow or choose a flatter route. You may even find yourself asking for this yourself after a few runs.

Souq Waqif — Doha’s “ancient” market.Visit Doha’s Souq Waqif for a sense of the old world. The “standing market” has been rebuilt to evoke an atmosphere of days gone by.The iconic souq is a maze of shops bursting with fabric, spices, sweets, household goods (think huge pots) souvenirs and art. Not only will you find wood carvers and tailors working away, you’ll see for yourself how the traditional agals Qatari men wear to keep their head dress in place are made.There’s an abundance of restaurants, including Syrian and Lebanese eateries, as well as shisha lounges. Head in the direction of the souq’s mosque for a cheap Arabic meal. Beside it is a modest restaurant with Qatari benches filling the passageway.Here you can sit down for a plate of kebabs and bread made fresh from an open oven.

Tip: The Al Wakrah Souq near the airport is understated and worth a visit. Its beachfront restaurants add to its charm.Souq Waqif; +974 4433 6444

3. Take in Doha’s Corniche and dhows

The waterfront promenade stretches seven kilometers along Doha walk along the Doha Corniche is a gorgeous way to spend a late afternoon. The seven-kilometer promenade stretches across the Persian Gulf in the West Bay from the Sheraton Hotel to the Museum of Islamic Art. You can grab a coffee, fly a kite or take a photo by the iconic pearl shell, a symbol of Qatar’s traditional past.There are also fitness machines installed along the way for public use.For an unobstructed view of the city’s skyline, hop on a dhow (you can’t miss them.) At night they’re lit up and have an interesting selection of music blaring out, so feel free to bring your own tunes.

4. See the Museum of Islamic Art

The Museum of Islamic Art stands on its very own island.Visit QatarWhen architect I.M. Pei designed the Museum of Islamic Art, he suggested it it be built on a standalone island so that no new buildings would obstruct it.Situated just off the Corniche, the museum looks like it’s floating on water from some angles.Calligraphy, Islamic patterns, jewelry and textiles from three continents make up its vast collection, with some of the items dating from the 7th to 19th century. The museum also features high profile rotating exhibits year-round.For an impressive business lunch or a memorable date night, try Idam, French-born chef Alain Ducasse’s first restaurant in the Middle East.The outdoor terrace on the top floor of the museum offers one of the best views of Doha, haute cuisine and generous service.

Tip: Follow the path around the museum until you reach the outdoor MIA café. Sit in a lounge chair for a chilled-out view of the city. You’ll also get a closer look at another landmark, the “7” sculpture, which towers at 80 feet high.Museum of Islamic Art; 5th Floor, Corniche Promenade, Doha; +974 4422 4444

Star cars: The Sheikh Faisal Bin Qassim Al Thani Museum.Grant Rooney/AlamyThis is one of the most surprising and interesting museums in the country. Located 23 kilometers west of Doha — the museum is the private collection of Sheikh Faisal Bin Qassim Al Thani.The Sheikh has been collecting since he was 10 years old and once built a fort to hold the seemingly random objects collected during his travels, which include ancient religious books, textiles, old cigarette packets and even an 18th-century Ottoman bomb.More than 15,000 artifacts fill the rooms here and one hall holds traditional pearling boats and vintage US cars.

East-West/West-East: Art in the desert.Qatar is passionate about promoting art and culture of all forms and has commissioned world-renowned artists to create truly unique pieces.Rising out of the sand In the Brouq nature reserve, 60 kilometers north west of Doha, is the East-West/West-East installation by sculptor Richard Serra.It’s made up of four plates, each about 15 meters tall, that stand along a one-kilometer corridor from the desert to the sea.Serra says he chose this particular spot because he liked the height of the old sea levels and the tall plates represent them.

Tip: Hop on a Fatbike if you want to get a work out. Tour companies operate services that will take you on an off-road adventure from Zekreet Village for a 13 kilometer round-trip. This only runs in the winter, when the humidity and temperature are down.Related contentQatar desert day trip: East-West/West-East and the Zekreet Peninsula

Doha’s Khalifa International Stadium was the first completed tournament venue for the 2022 FIFA World Cup.Supreme Committee for Delivery & Legacy/Qatar 2022 New stadiums and infrastructure are being built to house the surge of fans expected for the 2022 FIFA World Cup.They’ll be in good company as football is the most popular sport among the local and expat community, but it isn’t the only sport that draws a crowd.The ATP World Tour, which stops in the capital every winter, attracts tennis giants including Roger Federer, Andy Murray, Serena Williams and Caroline Wozniacki. The Qatar Moto Grand Prix, World Superbikes and Qatar Masters Golf Tournament are also annual events. So too are Qatar’s traditional sports — Arabian horse racing, camel racing, and falconry.Tip: If you want to be more than a spectator try the Losail Circuit Sports Club, which has a karting and motor race track open to the public.

Al Thakira Mangroves: Desert greenery. QTA One of the country’s most iconic spots — the Mangroves of Al Thakira is a large area of greenery and water with its own ecosystem in an otherwise sandy, scorching desert.It’s filled with bird life, herons and flamingos have been migrating to the region for years.The best way to experience the mangroves is to rent a kayak and get lost in the greenery.

Tip: If you’re here in January, bring a pair of water shoes and wade through the low level water. It’s easy to forget you’re in the desert.

10. Immerse yourself in The Pearl

The Pearl — an artificial island off the coast of Doha.Built on reclaimed land, The Pearl spans nearly four million square meters and is made up of a lavish mix of residential, commercial and entertainment outlets.One of its highlights is the picturesque Qanat Quartier, which was inspired by the Mediterranean, houses colorful apartments, canals, bridges and pedestrian-friendly squares with restaurants and cafés. Walk around the promenade and you’ll see rows of yachts moored on the pristine water. You may even get lucky and catch a super yacht there too.

Tip: For water sports, The Pearl has several adventure companies to choose from. So pack your wetsuit if you want to surf, kayak or wakeboard.

Katara Cultural Village was constructed to help raise cultural awareness in Qatar.Located on the way to The Pearl, Katara Cultural Village is the gem of Qatar’s art and culture scene.A maze of passages and waterways meander through here, revealing spaces for artists, filmmakers and photographers.You’ll find a mosque patterned with turquoise and purple mosaic, an outdoor amphitheater overlooking the sea and an opera house home to the Qatar Philharmonic Orchestra.It also holds festivals, including the Traditional Dhow Festival and the Palestinian Heritage Festival, as well as concerts. You won’t go hungry here thanks to the many international restaurants, cafés and kiosks. If you’re craving a simple local treasure, try a chapati and karak. But be warned, you may end up going back for seconds.

Tip: Water sports are also available at Katara — but you usually have to pay to access the beaches. Beach 4 however is free to families from Thursday to Saturday.

12. Eat at the best brunch spots

Sheraton Grand Doha’s all day dining venue Al Hubara is a fabulous brunch spot.Sheraton Grand DohaHotels in the capital take brunch to another level. They are abundant, whimsical and usually delicious , with options such as sushi, salad, roasts, grills, cheese, breads, chocolate fountains and flowing bubbly.Market by Jean-Georges at the W hotel continuously delivers, Vine at The St. Regis attracts chocolate lovers and for children, there’s an exciting feast at the Ritz-Carlton’s Superhero Picnic held on the last Friday of the month.If you’re not here at the end of the month — the Sheraton Grand Doha offers a garden brunch at its Italian restaurant La Veranda and its day dining venue Al Hubara Restaurant is also a top brunch spot.

13. Head to the shopping malls

Bulit to resemble Italian city Venice, Villaggio Mall has over 200 stores. You don’t have to travel far to reach a mall in Doha. One of the most well known is the Venetian-inspired Villaggio Mall, which has over 200 stores. However its indoor canal is its main draw. Here you can take a gondola ride and look up at a painted blue sky with scattered clouds.Doha Festival City is the largest mall in Qatar and has shopping and entertainment fully covered, with a string of fashion brands, IKEA, cinema, a theme park and an indoor snow park coming soon.The opulent Al Hazm, translated to, “the higher grounds,” mingles Arab tradition with European design and even has 200-year old olive trees imported from Europe. Check out the Cultural Center for rare volumes and classics.

Tip: Jump your jet lag away at Bounce, a new indoor trampoline park in Tawar Mall that spans over 4,000 square meters.

14. Explore a world of horses

Al Shaqab: A world of horses. Even if you’re not a horse fanatic, it’s worth visiting the Al Shaqab equestrian center in Doha for a glimpse of what happens when a culture that loves horses decides to spend a huge amount of cash on its passion.The result is a gleaming, ultramodern complex where prize sports and show horses are pampered and groomed into competition winners.Preserving local traditions of raising pure breed Arabian horses is the goal of this vast horseshoe-shaped center, but tours also allow visitors to watch training in facilities that include treadmills, swimming pools and private racetracks.

Mon Aug 31 , 2020
Whatever your favourite cuisine you’ll be sure to find a wonderful choice of places to eat in the capital – just make sure you try the local fare too Qatar is a multicultural melting pot, drawing together people from all countries and all cuisines, and with such a diverse population, […] 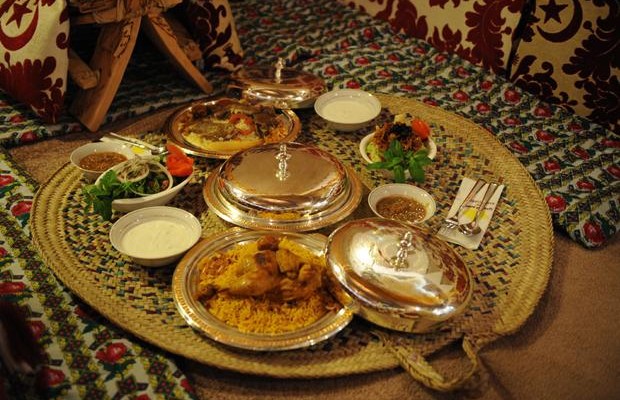