One of the most popular Rolex Oyster Professional sport watches from the last few years is the reference 116710BLNR GMT-Master II “Batman” — referred to as such because of its distinctive blue and black “Cerachrom” ceramic bezel. This was the first steel Rolex watch to include a two-tone ceramic bezel, which has since been supplemented with a blue and red “Pepsi” Cerachrom bezel in 2019 as Rolex updated the overall GMT-Master II collection with various new features, including a new movement. While the Rolex reference 126710BLRO (red and blue bezel) GMT-Master II stole much of the attention (aBlogtoWatch hands-on here) over the last year, it is also joined by this 126710BLNR (blue and black bezel) that is, in essence, an upgraded Rolex Batman.

The new 126710 generation Rolex GMT-Master II has upgrades over the previous generation 116710 in a few ways. One feature that is not, per se, an upgrade but merely a cosmetic difference is the choice of matching steel bracelet. For many, this will be the biggest difference between the Rolex Batman and the “Batgirl” (a nick name that I don’t find particularly fitting). The previous generation BLNR (the code Rolex uses to refer to the bezel style) was paired with a three-link Rolex Oyster bracelet (with a polished center link), and the new generation BLNR comes paired with an all-steel Jubilee bracelet.

Watch enthusiasts are sometimes up in arms about which bracelet is better or more desirable, and my take is that they are both good in their own ways. Some people claim that the Jubilee bracelet feels a bit too “old” but that is simply because it is mostly associated with more vintage Rolex timepieces on account of them not recently using the bracelet for its sports watches. The Jubilee style bracelet is incredibly comfortable, and it comes on the same deployant clasp (with a “comfort extension” as the that on the three-link bracelet. For me, the two bracelets are simply two different flavors that both match the GMT-Master II watch equally well.

Having a few flavors of the same watch is often important to Rolex — which is why, in 2019, it debuted both the GMT-Master II 126710BLNO and the 126710BLNR. Each is the same watch with the only difference being the colors of the two-tone Cerachrom ceramic bezels and the color of the GMT hands. The bezels themselves rotate in both directions and the 24-hour markers on the bezel are used in conjunction with the 24-hour GMT hand on the dial to know the time in other time zones. For this reason, the GMT-Master II has always been ideally suited as a traveler’s watch.

Rolex is funny about mentioning upgrades in its newest generation watches; you’d think they would be louder when it comes to discussing the new features, but the reality is that Rolex is careful not to make their older generation watches seem less desirable. “A Rolex is always a Rolex” according to… well, Rolex. Many people, for example, would not necessarily notice that the new generation GMT-Master 126710 has a different case than that of the previous generation. Both cases are the same 40mm-wide in Rolex’s Oystersteel (904L grade steel), but the 126710 has some slightly different angles to it and is machined differently. I’m not saying it is enough for 116710 generation GMT-Master II owners to “upgrade,” but for those who are keen to wonder what Rolex made different, then it is more than just a bracelet and a movement for the latest generation GMT-Master II.

Recall that the case is water resistant to 100 meters, with (of course) a sapphire crystal and a Cyclops magnifier window over the date window. Now lets discuss the movement a bit. We already discussed the movement when introducing the GMT-Master II 126710 back in 2019, but I will give you the basic details again. The movement inside the latest-generation GMT-Master is the in-house-made caliber 3285 automatic, which is the GMT version of Rolex’s 32XX generation of movements. The automatic movement operates at 4Hz, now 70 hours of power reserve. It also includes Rolex’s “Superlative Chronometer” rating, which is a stack of both third-party COSC Chronometer rating and more stringent in-house performance testing by Rolex. What I really appreciate about Rolex’s Superlative Chronometer rating is that (unlike most other watch makers) it comes with specific performance promises, one being accuracy to within plus/minus two seconds a day.

All Rolex movements perform pretty well, so aside from the increased power-reserve rating, I have a feeling that most Rolex wearers will not notice too much difference in terms of the movement operation from the last GMT-Master II generation to this most current 126710 family. When traveling, the movement allows the wearer to adjust the hour hand independently, which helps make it simple to adjust the local time when moving into different time zones.

A fair question to ask is whether or not one should seek out this blue and black 126710BLNR or the red and blue 126710BLNO — as they both cost and do the same things. In some senses, it is a matter of style and taste. It is also important to mention that both watches are currently very challenging to purchase at retail. That sort of implies that, for most buyers, the one they purchase is the one that they find available. It is the enduring recommendation of aBlogtoWatch that consumers do not purchase watches for above retail price, as in recent years speculators have been known to quickly purchase available popular timepieces and then attempt to immediately resell them for a premium. Such actions only serve to benefit the said speculators and should be avoided by most consumers. If you can get your hands on this, or any of the latest-generation Rolex 126710 GMT-Master II watches, then you’ll probably be quite happy with it. Price (recently updated in 2020) for the Rolex 126710BLNR GMT-Master II watch is $9,700 USD. Learn more at the Rolex website here.

Doha Metro getting ready to be back on track

Wed Aug 26 , 2020
DOHA: Doha Metro has installed 18,000 social distancing messages across the network as part of its preparation to resume service following the preventive and precautionary measures to curb the spread of Covid-19. “Getting ready to be back on track, 18,000 social distancing messages installed across the network. Thermal temperature scanners […] 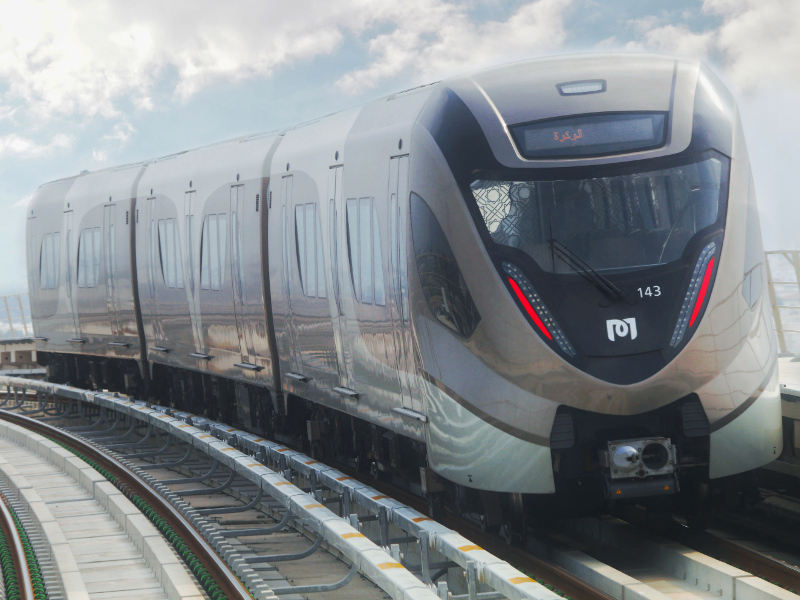